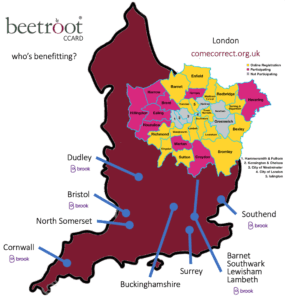 ‘We remain really happy with THERAPYAUDIT and have full confidence in the product (beetrootCCARD).”

Not so long ago the UK had the highest teenage pregnancy rates in Western Europe and its STI rates were also high. More recently there’s been a remarkable decrease in incidences of teenage pregnancy across the UK, although the UK rates are still the highest in Europe. The Office of National Statistics (ONS) report shows that ‘Conception rates in England and Wales, for women aged under 18, declined by 8% in 2015 … Under 18 conception rates have declined by 55% since 1998.’ There is some debate as to why this decrease has taken place, but one of the main contributory factors must be the prevalence of sexual health advice services like CCARD condom distribution schemes which are now widespread across the UK. However while teenage pregnancy rates are falling, STI rates are rising steeply (up to 76% over 4 years) – particularly in London. So the need for CCARD schemes remains as relevant today as always in protecting young people’s sexual health and wellbeing.

beetrootCCARD is THERAPYAUDIT’s digital support solution for sexual health and CCARD condom distribution schemes. Essentially we provide a user-friendly digital interface that can be accessed by providers of the service from anywhere there’s an internet connection. Young people who benefit from accessing the sexual health service receive a CCARD (like a credit card but only recording their identifier in the beetrootCCARD database), and this enables providers and commissioners to keep track of the distribution of condoms and advice to beneficiaries. This digital support has improved efficiency in collecting data and the reporting of outcome data enormously compared to the more ‘traditional’ use of paper records.

Send us an email and we'll get back to you, asap.